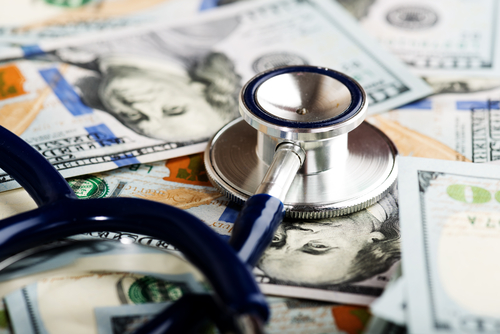 “I realize that physicians are low hanging fruit, and given the public perception of physicians as “rich” we make convenient targets for the torches-and-pitchforks crowd.” – Pathology

Doctors are often one of the first professions that come to mind when thinking of a high-income job but not all doctors become wealthy, not all began wealthy, and some who would be considered wealthy by objective standards still don’t feel rich. We asked physicians, do you think the perception of doctors as wealthy is generally accurate?

68 percent of doctors said the perception of doctors as wealthy is not accurate.

Many pointed to the amount of debt and years of schooling involved in becoming a doctor as serious mitigating factors:

“Physicians basically lose 4-10 years of their “young” lives and earning power due to med school and then residencies – in the case of people going into general surgery, no income until age 30.” – General Surgery

“My friends who started working at age 23 are now retiring at the age of 60…They spent maybe 2 years getting a MBA in a class room during the day about 12 hours a week, I spent years in residency working 120 hours a week. Do I think I am overpaid? Let’s look at lifetime earnings, debt, and training time before we calculate overall earnings.” – Anesthesiology

Some doctors asserted that, while they are financially comfortable, they are not the ultra-wealthy citizens that many people picture:

“Ask any American to close their eyes and imagine the house and car of somebody who is “wealthy”, and nobody is picturing my nice, yet modest suburban house, nor my 9 year old Acura.” – Anesthesiology

“[My wife and I] aren’t driving luxury cars, we live in a very nice but modest house, take a vacation once a year that generally involves driving instead of flying and I still only take limited vacation time.” – Neurology

Many doctors were not even financially comfortable when they began working towards becoming a physician:

“Have you ever been poor? Really poor? Have you ever been hungry and hung out waiting for a friend to offer you some dinner? Did you ever get food stamps and big slabs of American cheese and boxes of rice? Did you ever spend the last fifty cents you had for bus fare to go borrow a few bucks from the dean of your medical school so that you could buy food till the next installment of your loan cam in? I am a healthy, wealthy rich capitalist cardiologist now, but I remember when I wasn’t” – Cardiology

Other high-earning professions were raised as comparisons, with many doctors noting that several other fields earn significantly more than doctors (many of whom face high costs running their own practices):

“We all know the average salary of a physician. It’s among the highest. But subjective terms like wealthy can be redefined when it comes to CEOs, bankers, those in finance or law.”– Family Medicine

“The community doesn’t realize that, when it comes to running a private practice, the doctor has to pay the salaries of the people employed. CEO’s don’t need to.” – Ophthalmology

Many rejected the idea that expensive healthcare systems can be traced back to how much doctors are paid:

“Healthcare in the US isn’t expensive because of physician incomes, and this has been proven over and over again by independent analysis. You could cut physician incomes to near zero and it wouldn’t decrease the cost of healthcare to any appreciable degree. You would, however, wind up with a thoroughly demoralized and decimated healthcare workforce if you were to do that.” – Pathology

“I am sure you could find twenty such “doctors are overpaid” articles published over the last 40 years. I don’t think you need worry that this will result in anything. Its the insurance companies you need to worry about.” – Endocrinology

Several said the perception of doctors as wealthy is accurate but more visible than other wealthy professions because of its relative difference to patients’ income and doctors’ exposure to broad groups of the public:

“Because our income is several times that of our patients there is zip sympathy from the general public… medicine is, after all, an unforced choice.” – Internal Medicine

“One of the reasons doctor’s income might matter so much to the general public is that we may be the highest paid member of society that faces nearly all of the general public. Highly paid CEOs, accountants and lawyers interact with other highly paid professionals. [The] same can be said for highly paid for sports and entertainment stars. But we interact with people at all levels, every day, and that forces a comparison.”– Hematology Oncology

Are you a physician? Join Sermo to join the conversation and comment on your experience as a doctor!